The County Supervisors have been tasked with the vote of whether or not to renew the acceptance of Stonegarden funds.  The funds have been accepted for many years; however, this year, the m Board voted against accepting the funds.  I did some research on the issues, and I wrote about how I would have voted “Yes” for Stonegarden funds.  After sharing my comments, I was encouraged by several community members to gather more information about the story of Stonegarden funds, and the situation in Arivaca.

I had some online conversations regarding concerns with targeting by Deputies, and concern of “spy towers”.  I committed to making a trip to Arivaca, so I could (1) go through the checkpoint; (2) chat with locals; and (3) visit the Lake.

I jumped into my car at 10 AM, gassed up at the QuikTrip, and headed down the I-10 to Arivaca.  From I-10, I merged onto the I-19, and then followed the signs to Arivaca.  The speed limit signs changed, and I saw the announcement that the Border Checkpoint was ahead.

I came to the checkpoint, where I was waved through, along with another car in front of me. The Border Patrol was checking in with the car heading toward Tucson.  We had approached at the same time, and as I pulled through the checkpoint, I could see the vehicle headed the other direction proceed toward Tucson as well.

Eventually, I came to Amado, and I pulled over to take a quick picture.

Getting To The Lake

I continued on; my goal was to get to Arivaca Lake, because what I heard of it sounded like it might be like Ramah Lake, which I had lived near when I lived in New Mexico.

Google Maps led me to the Arivaca Boys Ranch, and I couldn’t tell if it would actually get me to the Lake, so I turned around, went through the tiny “Downtown” of Arivaca, followed the signs to the Lake, passed a few Border Patrol vehicles and passenger vehicles.  I waved to the oncoming drivers, like I did when I lived in New Mexico, traveling along the rural roads.  I felt myself relaxing, as I fell into the comfort of the rural dirt roads… and I eventually arrived at the boat launch.

I parked my car, and got out of my vehicle, greeted by the sounds of a small child and his mother.  They were on a short path by the Lake, and the mother was reprimanding her son for wandering away without permission, and he was crying.   They returned to their group, and I walked along the short path by the Lake, took some photos, and then walked back to the boat launch, and onto the pier, empty except for abandoned shoes, probably belonging to the kids who were in the Lake.  Some kids were out on the Lake in a kayak, and a fisher boat was coming in.

The fisherman greeted me as they came in, and I asked if they had any luck.  They had.  They had caught some bass.  I asked if they were local, and shared that I am running for County Supervisor.  They said they were from Tucson, and former TPD officers.  We chatted about how I was a former member of CPARB, and we chatted about how TPOA said I was anti-police during my campaign. We talked about the situation with Sergeant Mann, and I shared how I felt too much of the blame had been unfairly placed upon him; and the U of A student should not have approached the back of the police line.  We chatted about the concerns of citizens that officers were racially targeting individuals.  We chatted about the requests I had made for data, and the response that it was not available.  We chatted about how I had advocated for the City helping officers purchase their bulletproof vests, and how I had tried to work with the Police Foundation, and was told that I was not allowed to do that.  Their boat was secured to their truck, and we said Good-bye.

After the fishermen left, I struck up a conversation with some locals, set up with a table at the side of the Lake.   They were hosting a fishing tournament.  We talked about why I was campaigning for a seat on the Board (my concerns for the conditions of the roads in the rural areas of the County, the need for our policies and budgets to be better, and for our education system to be improved), and the work I did now (with the Environmental Education Exchange, and limiting policies and focus in schools), and I asked what concerns they had (the roads, the requirements to follow the County’s guidelines on their small recycling operation, and the individuals who come in trying to cause problems in the community).  We exchanged contact information, and agreed to stay in touch.

I took a couple more photos, and then got back in my car to head back to Tucson.

Leaving the Lake and Heading Back To Tucson

On the road back to Arivaca, I stopped for a moment to snap this photo of the patched road.  There were many sections that had been patched. 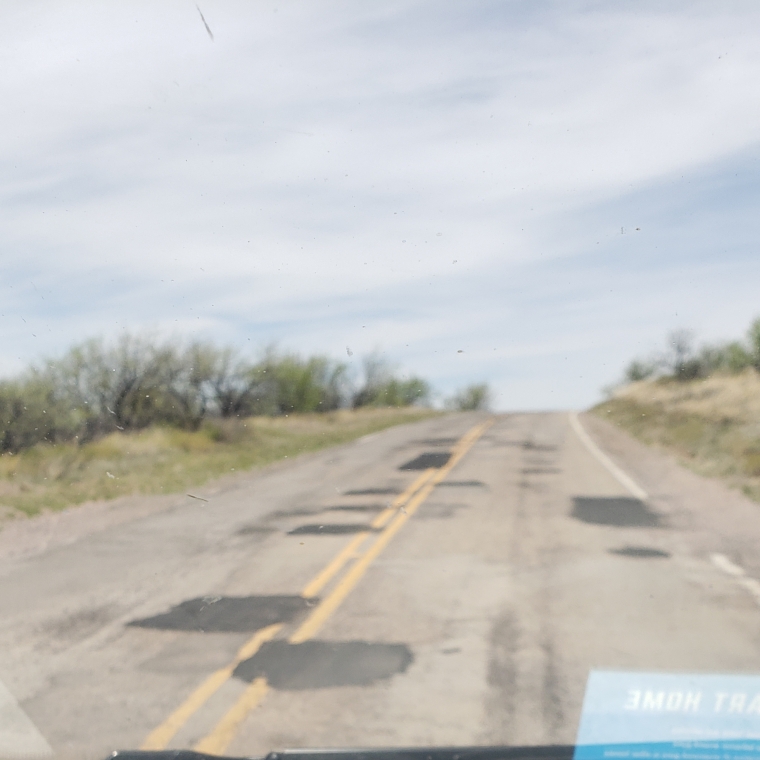 My last photo out in Arivaca.

When I approached the Checkpoint, I was the only traveler on the road.  I rolled down my windows, and was asked if I was a U.S. Citizen.  I said I was.  We chatted briefly about my hat (I was wearing my EEE hat), and about water sustainability and grants for water cisterns at a home.  A car pulled up behind mine, so we said Good-bye, and I returned to Tucson.

When I arrived back in Tucson, I researched Arivaca and the militia, and the murder of Brisenia Flores and her father, and also found this video “Fighting Arizona’s Border Militia”; and also checked for an update on the Commission and found this April 9, 2019 update “Commission Rejects Stonegarden Grant”.

I have been trained in the system of continuous improvement.  That training is coupled with one of my favorite lines from Shakespeare’s “Romeo and Juliet.”  Romeo implores those he loves to “Be satisfied!”

First, I hope that we can be satisfied. However, that is frequently difficult to do, because of our differences of opinion, and the reality that there is more than one way to solve a problem.

In this case, things that could have been done (and be done) differently (in no particular order):

(1) Racial profiling should be addressed.  Racial profiling is a concern in the City and the County.  For example, the request for information from the Sheriff’s Department by the Commissioners is the same type of information that I requested from TPD when I was on CPARB (in 2013).  Law Enforcement should be tracking this information (the number of stops and conversations and the ethnicity of individuals (officers can explain that a survey is being conducted to address concerns of racial profiling), so it is readily available, provides transparency, and ensures that implicit bias is not an issue;

(2) Supervisors should ensure seats are filled on Commission Boards;

(3) Supervisors should postpone the vote if recommended to do so, with valid reason from the Commissioners  (Note: These postponements should not be for any light or transient reason);

(4) Concerns raised by the Commissioners should be addressed.  In this case, the issues are: (1) not wanting to subject deputies to additional overtime; (2) uncertainty over Stonegarden’s effectiveness; and (3) lack of transparency from the Sheriff’s Department.

(6) Supervisors should coordinate efforts to find the best solution;

(7) Funding from the State or Federal Government that conflict with local needs should be communicated with State and Federal Offices;

(8) Implementation and Maintenance Plans should be reviewed continuously, with frequency determined per Department purposes.

Support the campaign at http://www.feliciachew.com/support

One thought on “Felicia Chew on Stonegarden Money (Part Two)”

Follow We are each a piece of the puzzle of life on WordPress.com